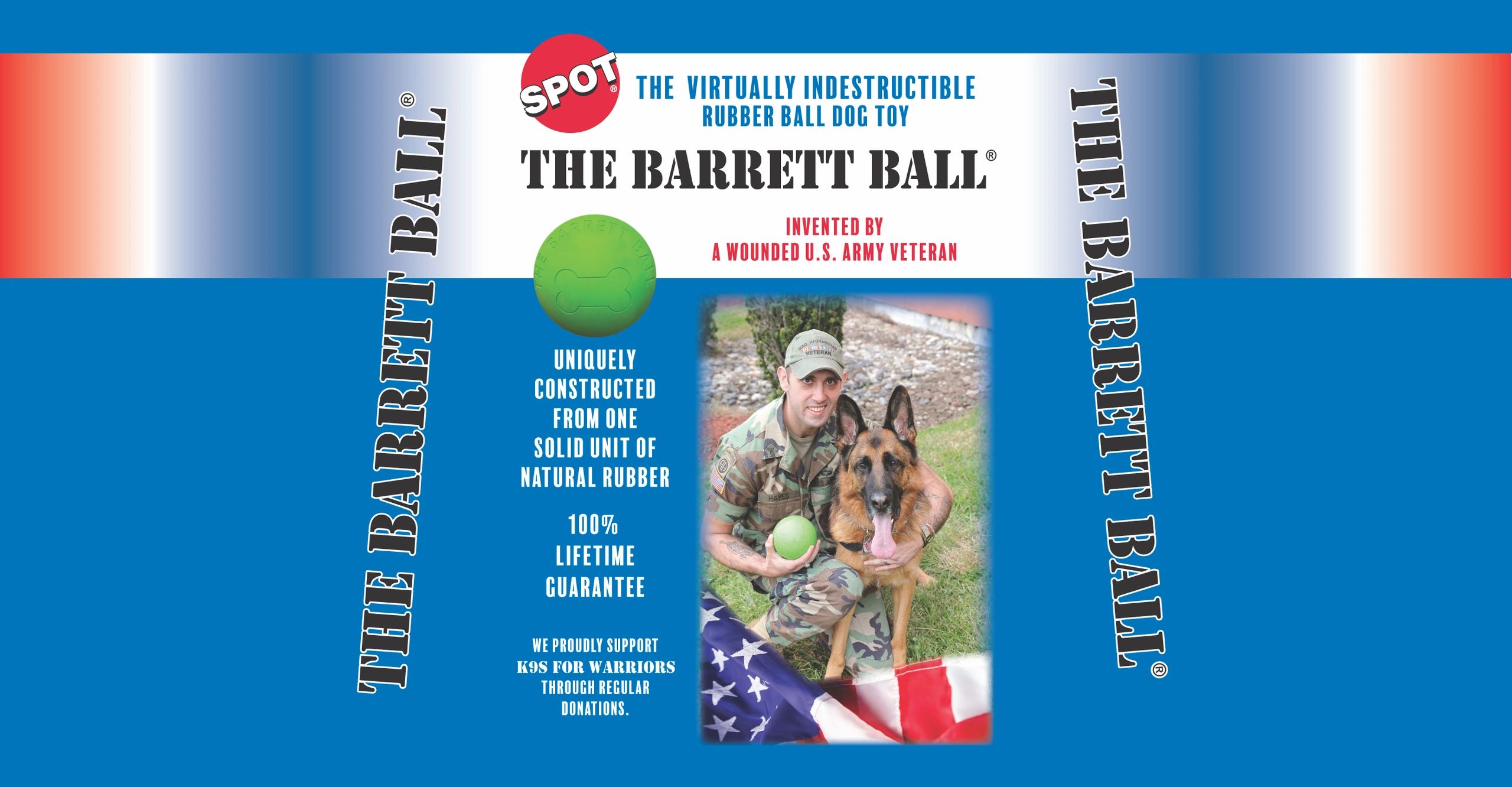 For more information on The Barrett Ball, give us a call!

Two remarkable stories of determination and persistence come from the household of disabled war veteran James Hayes, who has a service dog, an 85 LB German-Shepherd named Barrett.

Barrett was given to James by Dogs4Warriors, an organization that helps veterans cope with Traumatic Brain Injury and Post Traumatic Stress Disorder, both of which James suffers from, after 3 combat tours in Iraq and Afghanistan.

James and Barrett quickly developed a close bond, but there was a potentially dangerous problem – Barrett routinely tore apart the toughest of chew toys, including those dubbed “indestructible”. So James set his sights on finding a stronger, safer product for his new best friend.

“Veterans Twice as Likely to Start Their Own Company”

James refused to give up in his quest for a toy that even a determined dog like Barrett could enjoy, but not destroy.

Unable to find any suitable product, James proved U.S. Sen. Tammy Duckworth D-Ill. correct, when she explained why veterans are twice as likely to start or lead their own companies as civilians: “Those who’ve worn the uniform have a kind of courage instilled in them” said the senator, herself a retired U.S. Army lieutenant colonel. “The type of resilience and determination that can turn a long-shot idea into a profit-making business.”

James had never heard of Sen. Duckworth, but proving her right, he had already contacted a variety of manufacturers. James now has a patent pending on the unique manufacturing process he developed to produce a completely solid indestructible rubber ball.

His quest ended when he found Ethical Products in Bloomfield, NJ. They were the first company willing and able to help produce James’s re-designed ball, and to also do something quite profound with their profits by making regular donations to K9s for Warriors.

To Learn More or Purchase a Barrett Ball

Named after James’s beloved dog, the Barrett Ball will be available in small, medium and large sizes, priced from $6.99 to $29.99 and comes with a 100% lifetime guarantee.

The Barrett Ball comes in three sizes for most breeds. To choose the right size ball, see the chart suggestions and choose the ball best for your dog!

The Barrett Ball makes the news!

James and Barrett were recently interviewed on Fox Rochester.

Check it out here!
https://foxrochester.com/news/good-day-rochester/local-veteran-creates-indestructible-dog-toy

Disabled veteran who served our country in three tours of duty in Iraq and Afghanistan.

Leading manufacturer of pet toys and accessories for over 67 years.